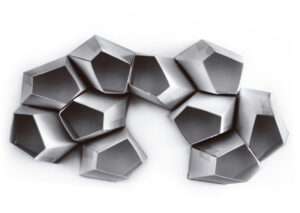 Project «PICOROCOS»
Francisco Muñoz / Workshop Dynamo
The «barnacles» project originated from an intervention proposal for the theater-museum of puppets and clowns of Valparaiso and was primarily intended to give life to an inert space (located on the street, on the eve of the enclosure), surprise and make the audience laugh. It’s basically a joke for the passerby is the appearance of a wall of a number of elements «living» features animals, which look and hide turn from a rigid modular structure, screaming and appearing at a random rate  and that occurs as a reaction to external stimuli. This modular elements as a whole forms a colony which reproduces in clustering scheme and gestural characteristics, how they are grouped on the barnacles rocks.
This intervention has an almost animal behavior, where «individuals» that make up this colony react individually and together in the presence and proximity of the observer, varying according to the distance at which the observer is located. If the observer is in the range of interaction with elements, they react by increasing their frequency and sound pressure level in relation to the proximity of the person, but if it exceeds a minimum distance quickly hide again until the observer moves away to a safe distance for picoroco.
http://www.youtube.com/watch?v=vYwvyg_Aqx0
http://www.youtube.com/watch?v=7qzwnqJEKu4