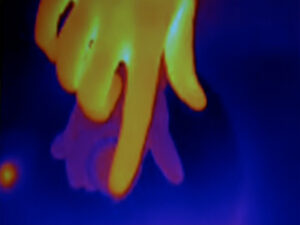 Video installation with sound, (image recorded imager), 2013,
Narrative terms the video is based on the musician and German astronomer William Herschel and his sister and closest collaborator considered one of the first women scientists, Caroline Herschel.
William with the help of Caroline built telescopes and discovered the planet Uranus on March 13, 1781 as well as moons, comets and several nebulae. The study conducted by William sunlight, rays were discovered beyond the red and that were invisible to the human eye infrared rays.